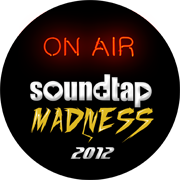 KTUH is competing in Soundtap Madness 2012, where 64 of the best noncommercial radio stations from around the world go head to head in an 18-day tournament that is determined by listeners. Stations that accumulate the most minutes of listens per 3-day period advance to the next round.
To help KTUH achieve radio domination, just create a free user account, log in and listen to your favorite KTUH shows between March 15 - April 1. In the first round, we'll be going up against WUTK in Knoxville, TN.
For more info on Soundtap, see my former post, here or simply visit soundtap.com 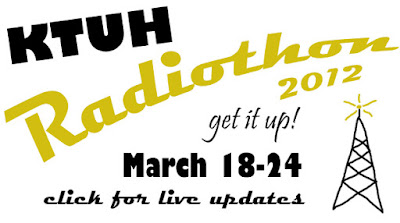 It's that time of year again...KTUH Radiothon!!! As a noncommercial college station, KTUH is funded in small part by student fees, but mostly through the generous donations from you, our listeners. Thank you for your continued support. Last year's Radiothon was a success and the donations we received helped us with the much needed renovations to our air room and live room (still in progress).
This year we are focusing on getting a new and improved antennae that will boost our signal from 3000 watts to 6000 watts, increasing our converge area on the island and improving the quality of our signal. Thus our slogan for this year is Get It Up!
Donations are 100% tax-deductible, and all donations of $50+ will receive a free KTUH T-shirt. Other premiums may be available during different KTUH shows. With every $20+ donation made on Mar.20th, noon-3pm (Hawaii Standard Time) during Timbre Tantrums, you will receive a exclusive Timbre Tantrums mix CD. For more information, visit the KTUH Radiothon page.
Timbre Tantrums - Tue., noon - 3pm on KTUH, 90.3 FM, Honolulu